In real life we come across situations when we need to perform a set of task repeatedly till some condition is met. Such as – sending email to all employees, deleting all files, printing 1000 pages of a document. All of these tasks are performed in loop. To do such task C supports looping control statements.

For loop is an entry controlled looping statement. It is used to repeat set of statements until some condition is met.

Syntax of for loop

Parts of for loop

Important note: All four parts of a for loop is optional. Hence you can write a for loop without initialization, condition, update or body. However, you must follow the syntax and specify semicolons.

How for loop works?

Step 2 to 4 is repeated until condition is met.

Flowchart of for loop 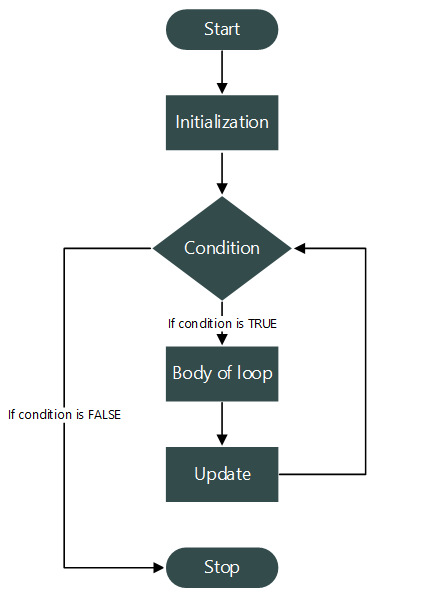 Example program to demonstrate for loop

Let us write a C program that print natural numbers from 1 to 10.

To get a better hands on for loop practice exercises based on loop.