goto is a jump statement used to transfer program control unconditionally from one part of a function to another. I have used the word unconditionally because there is no restriction on control transfer. You can transfer program control from one position to any position within a function. Many programmers uses goto to gain full control on their program.

There is no restriction in order of goto and label. You are free to define a label anywhere inside a function. For example both the below examples are valid. 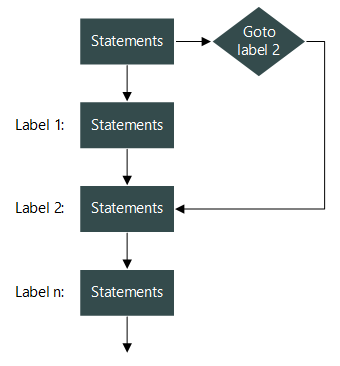 Use of goto in programming

goto makes program less readable, error-prone and hard to find bugs. Due to the unconditional control transfer from one part to other part of a function. At one point, you as a programmer cannot tell how program control came to a certain point in your code. Therefore, most of the programmers avoid the usage of goto.

Important note: You should avoid usage of goto as much as possible. Try to replace goto statements with a combination of if…else, switch…case and loopping statements.

Consider below example of goto to demonstrate when and why you should avoid usage of goto.

The above program is hard to read and find bugs if any. Hence, you must avoid usage of goto in such situations.

Okay lot of programmers including me talks about the unreliability of goto. However, goto can be useful in many cases such as.

Note: You can construct any loop using combination of goto and if...else.

Many text and other materials on internet make use of goto as a loop. However, I believe goto should not be used as a replacement of loops. In below program I will show one real use of goto statement.