for loop is easy to implement if you specifically know start and end position of the loop counter. However, things in the real life are not so simple. You may come across situation where you only know when to terminate the loop. For example – reading instructions from user until terminated manually, waiting for client connection until connected or cancelled, reconnecting to the server until connected.

while loop is an entry controlled looping construct. We use while loop to repeat set of statements when number of iterations are not known prior to its execution. It provides flexibility to define loop without initialization and update parts (present in for loop).

Syntax of while loop

Parts of while loop

Unlike for loop, while does not contain initialization and update part. It contains only two parts – condition and body of loop.

At this point, you might be thinking about loop counter variable-initialization and variable-update part. Where to put these? You are free to initialize loop counter variables anywhere in the program before its use. However, best practice is to initialize all important loop variable just before the loop. Likewise, you can keep your loop update part just before the end of loop.

How while loop works?

Simplicity of while loop exists in its working mechanism. while loop works in two steps.

Step 1 and 2 are repeated until the loop condition is met.

The above two steps are repeated, until loop condition is true.

Flowchart of while loop 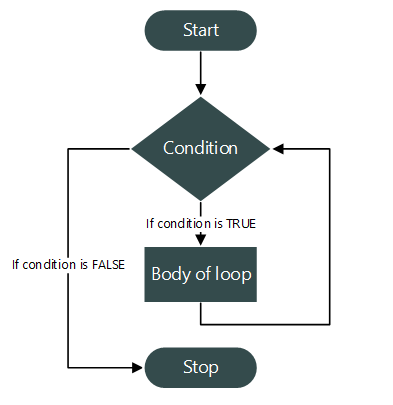 Example program to demonstrate while loop

Let us write a C program to print natural numbers from 1 to 10 using while loop.

Explanation of above program